Extra fun after the season!!! 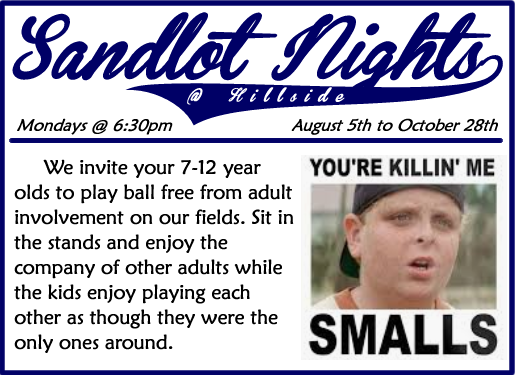 That four-word quote has become an oft-used expression of exasperation with someone or something for over 25 years, even if some who say it are not sure of its origin. It's also fun to say, don't you think?

If you ever spent a season at ball fields anywhere around the country, chances are you saw this quote on more than a few shirts or hats.

A new feature after the 2018 season, the Hillside Athletic Association hosts "Sandlot Nights" as an homage to the classic 1993 movie "The Sandlot". The inaugural year was such a success, we decided to make it an annual tradition.

At 6:30pm each Monday evening between August 5th and October 28th (weather permitting, of course), we welcome all kids from all corners of the metro area between the ages of 7 and 12 to meet at the fields to pick teams for a couple hours or so of ball playing without adult involvement. Parents often sit in the stands while their kids start playing as though they found a large open field in the neighborhood to play ball on, making up their own rules if they choose.

To better understand what Sandlot Nights at the Hillside Athletic Association fields are, please click the link below to watch an excellent short video and we hope to see your kids there! Invite everybody you know to join us and hopefully Sandlot Nights will grow to become something you and your kids will remember forever.